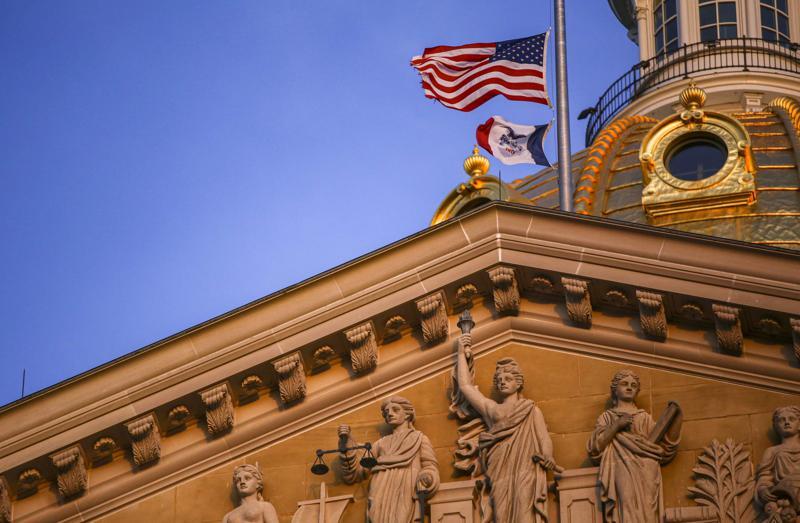 A close view shows intricate details on the Iowa Capitol in Des Moines on Dec. 19, 2019. (The Gazette)

DES MOINES — Cash awards for pain, suffering and other non-economic complications resulting from medical malpractice lawsuits would be capped at $1 million under legislation being considered by state lawmakers.

The proposal has been floating around the Iowa Capitol for several years. But this year, Governor Kim Reynolds highlighted the proposal in her annual statehood address earlier this month.

“This is the year we must enact common sense tort reform to end the runaway verdicts that drive our OB-GYN clinics out of business and medical graduates out of state,” Reynolds said during the this speech. “A hospital administrator said the situation was so bad that he was often asked about Iowa grand jury verdicts on recruiting trips. Two years ago, that had never happened. he legal environment is changing and our laws must keep pace.

Iowa is one of 11 states that does not have a cap on non-economic damages in states for medical malpractice, according to a 2020 report from the Center for Justice and Democracy at New York Law School.

Among states that share a border with Iowa, Wisconsin, South Dakota, Nebraska and Missouri, non-economic damages are capped in medical malpractice cases, unlike Minnesota and Illinois.

A legislative hearing on the proposal Wednesday at the Iowa Capitol attracted a lot of attention from lobbyists and state advocacy groups.

Speakers representing the medical community said the legislation was necessary because without a cap doctors are reluctant to work in Iowa and it becomes difficult for hospitals and clinics to recruit and retain doctors. And they said without a cap, the cost of insurance can rise enough to cause hospitals or clinics to close, especially smaller ones in rural areas.

Representatives of the medical community highlighted two 2022 judgments in particular: a $97.4 million award to a family whose newborn baby suffered permanent brain damage when his head was crushed due to the use of improper procedures by health care providers during childbirth, and $27 million in compensation to a man whose case of bacterial meningitis was misdiagnosed as the flu.

“(Doctors) don’t want to get into a state where liability is so volatile,” said Sandra Conlin, lobbyist for the Iowa Hospital Association.

Mikayla Brockmeyer, a third-year medical student at the University of Des Moines, said many of her classmates, even those who are from Iowa, tell her they would like to stay in the state and practice, but plan to leave Iowa after graduation.

Only 22% of undergraduate medical school graduates stayed in Iowa in 2020, which was the seventh-worst rate in the nation, according to the latest annual report from the Association of American Medical Colleges.

“It’s something to hold Iowa doctors back for years and years to come,” Brockmeyer said during the legislative hearing.

Those opposing the legislation largely represented lawyers and advocacy groups. They argued that the state should not place an arbitrary limit on financial rewards for Iowans who are seriously injured during medical procedures.

Speakers opposing the bill included Sam Clovis, a former Republican candidate for the U.S. Senate who has filed a lawsuit claiming medical negligence left him paralyzed from the chest down and confined to a wheelchair, and Chip Baltimore, a lawyer, lobbyist and former Republican state legislator who chaired the House Judiciary Committee.

“I’ve heard a lot of talk here on the other side about doctors and hospitals and insurance costs, system costs… Where’s the talk for the patient?” says Slater. “(The bill) puts the finishing touch not only to restricting patients’ rights, but also to eliminating them.”

Sen. Nate Boulton, a Des Moines Democrat and attorney, declined to sign the bill in the subcommittee.