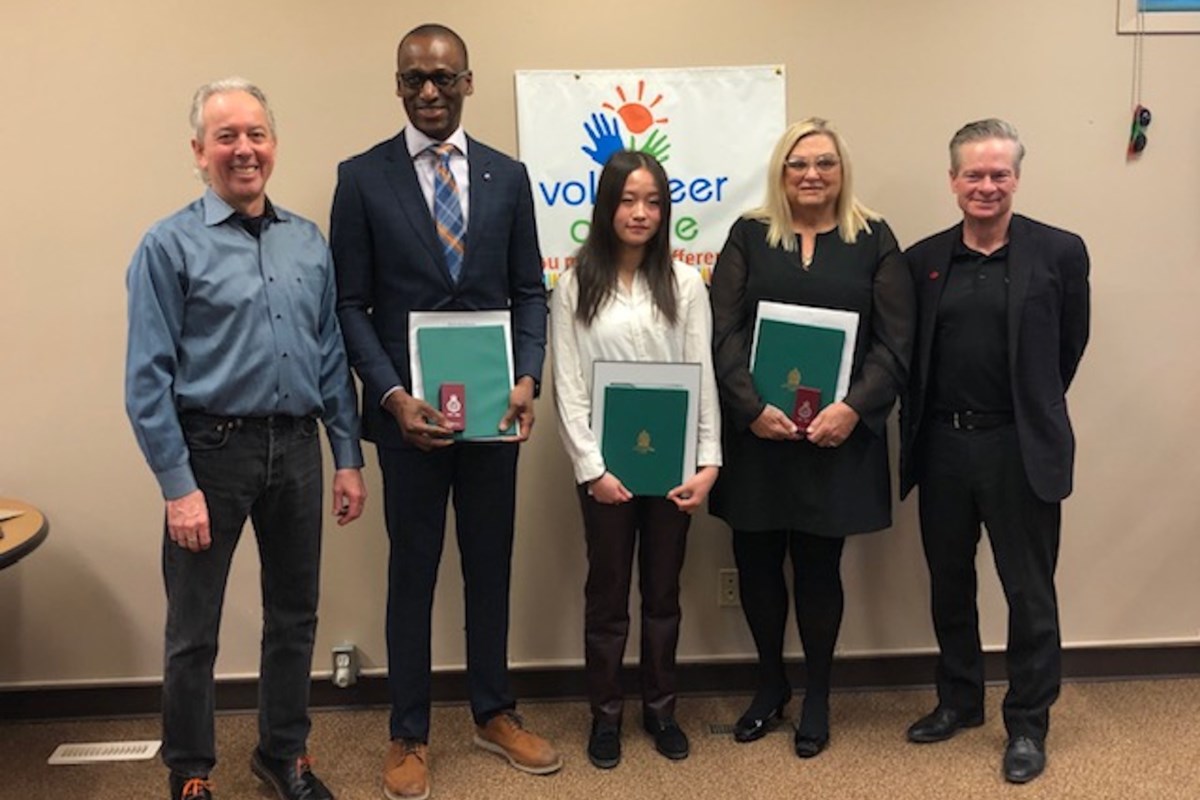 “We don’t do it for the fame or the money, we just do it because we love what we do. We want to see a better society, a better future for our children,” Ilochonwu said.

Two longtime Airdronians and volunteers received the prestigious Queen’s Platinum Jubilee Award for their contributions to the community in a small ceremony on January 15 at the Volunteer Airdrie office.

Lise Blanchette and Kene Ilochonwu both received the commemorative medal recognizing the significant contributions of 7,000 Albertans to the province.

The Queen’s Platinum Jubilee Award was established in 2022 to mark the 70th anniversary of Queen Elizabeth II’s accession to the throne as Queen of Canada and as a way for Albertans to honor the life of Her Majesty’s service.

Longtime Airdronian Lise Blanchette said she found out she had won the medal late last year. She noted that it was a “wonderful surprise” to be recognized for all her volunteering and giving back to the community.

Subsequently, in 2010, she became involved with the Airdrie and District Hospice Society, initially on a voluntary basis. Eventually, Blanchette joined the company’s board of directors and became its vice-president, president, and eventually general manager.

Blanchette said her own experience of palliative care and personal loss inspired her to get involved with the organization. She lost her sister and father five weeks apart and witnessed the tremendous end-of-life support provided by palliative care.

“I volunteered at the Hospice Society for nine years before becoming executive director,” she recalls, adding that she has held long-standing volunteer and paid positions in the community.

After 10 years working for the Hospice Society, Lise has decided to shift her priorities from work to family, announcing her retirement at the end of December 2021.

However, she told the Airdrie city view on January 24, she returned to her position as chair of the board of directors of the Airdrie and District Hospice Society, reviving her passion for community service.

Blanchette confessed that she was an admirer of the late Queen Elizabeth II’s passion for service, citing Her Majesty’s longstanding service to her country as an inspiration.

“When I worked for the Federal Government for 25 years, I swore allegiance to the Queen,” she recalls. “I don’t know if they still do it today, but when I started…you [did].”

She added that her military father was in the Air Force and always encouraged her to give back to her community.

“When I accepted the award, I was a little emotional because my dad always told me that whatever community you live in, you should give back to that community, should be part of that community,” she said.

Jubilee Award recipient Kene Ilochonwu was born and raised in Nigeria. He earned his law degree and license to practice law there before moving to Calgary, where he lived for about 12 years.

Although Ilochonwu received other accolades in his life (he was named one of the 25 most influential lawyers by Canadian Lawyers Magazine in 2021 and received the Excellence in Law category from the Calgary Black Achievement Awards), he said it was an honor to be selected to win the Queen’s Jubilee Award alongside the other recipients.

He said that during her 70 years on the throne, Queen Elizabeth II was passionate about contributing positively to society and worked selflessly to do so, as do many volunteers.

“We don’t do it for the fame or the money, we just do it because we love what we do. We want to see a better society, a better future for our children,” he said.

Ilochonwu added that many volunteers have also benefited from the work of other volunteers in their lives.

“A lot of times you do it because you benefited from it, and so being an immigrant to this country, I had a lot of people who gave their time to guide me, not knowing who I was,” he said. -he explains. “And so, it’s my goal until I drop dead to continue giving my time, my effort, my money…anything I can to help this company grow.”

Ilochonwu has resided in Airdrie since September 2021. He said that before moving to the city he researched local volunteer opportunities online.

“I have lived in Calgary most of my time here in Canada and have volunteered with a few organizations there. Moving to Airdrie, I said, ‘I have to do something in Airdrie now that it’s my home,’ he shared.

He was subsequently selected for a position with the City of Airdrie Subdivisions and Planning Appeal Board, and has served on council since last year.

He also volunteers with the Civil Claims Duty Counsel Project of Pro Bono Law Alberta and is active in the Black Law Student’s Association at the University of Calgary. Ilochonwu also mentors students and internationally trained lawyers through the Canadian Bar Association and Global Lawyers of Canada mentorship program.

The lawyer is also a board member of Calgary Black Chambers, Global Lawyers of Canada and Our Savior Anglican Church in Calgary.

“I also mentor many foreign-trained lawyers or lawyers who come here from abroad and want to qualify here,” he said, adding that he also mentors young people through of the Calgary Catholic School District. “Have professionals mentor these students so they know their profession is not what you see on TV.”

And to top it off, Ilochonwu is also a reservist with the King’s Own Calgary Regiment (RCAC), a Primary Reserve armored reconnaissance regiment of the Canadian Armed Forces.

In 2020, Kene Ilochonwu became the Law Society of Alberta’s first Black Bencher in its 113-year history. Councilors serve as volunteers for a three-year term, up to a maximum of nine years in total if re-elected.