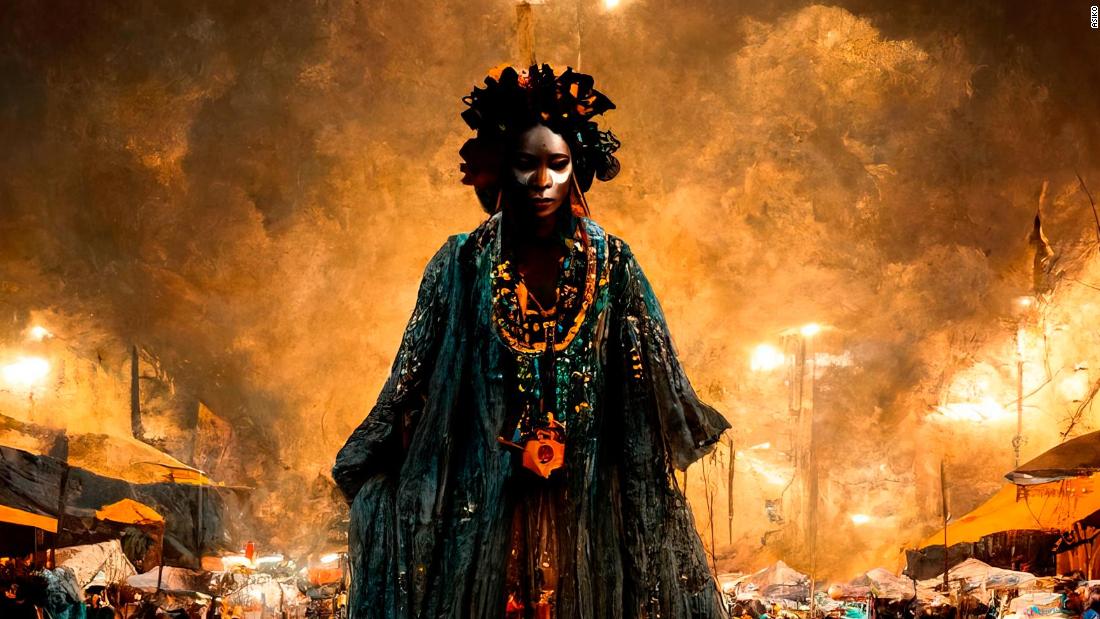 Appreciating cultural heritage and using it to imagine a better future: this is one of the objectives of self-taught photographer and visual artist Ade Okelarin.

Professionally, he goes by the name “Àsìkò” – the word for “time” or “the moment” in Yoruba, one of the languages ​​of his home country of Nigeria. Drawing on aspects of traditional Yoruba culture has been an important aspect of his creative journey. Through two recent series entitled “Guardians” and “Of Myth and Legend”, he explores the iconography of Yoruba deities, or “Òrìshàs”.

In Yoruba history, the Òrìshàs were sacred beings endowed with divine powers, and belief in them continues beyond West Africa, having been transmitted by slaves and their descendants in the Caribbean and South America, among others. But having grown up in Nigeria in the 1980s and 1990s, where traditional education around indigenous beliefs was not common, Okelarin says his journey as an artist has been about deconstructing prior knowledge.

“The work is about exploring and understanding things that I wasn’t taught in school,” Okelarin said, “and creating space for me to understand heritage and create something with heritage.”

His portraits and images of Òrìshàs combine traditional photography with artificial intelligence (AI), digital editing techniques and collage, and are Okelarin’s way of making connections between various world mythologies, through which, he says- he, we are all connected in our deeply rooted stories. .

While researching the projects, he noticed similarities between elements of Yoruba and Western mythology, such as the Yoruba deity Sango and the Norse god Thor, who are both deities of thunder and lightning, and the ‘Òrìshà Olokun, which represents the sea, as its Greek. Poseidon counterpart.

In this work, Okelarin reinvents Olokun, the Yoruba goddess of oceans, seas and wealth. Credit: Time

The premise of his work, he says, is to “look back to look forward” to learn where Africans come from as a society and help shape a future “shaped not by Westernization, but through the anchoring of a cultural ideology and aesthetic”.

Okelarin moved to the UK in 1995 and says his research into his own culture changed his frame of reference from that of a Western gaze to one that celebrates a “beautiful different point of view” and helped him understand his legacy.

“In the world of increasing globalization, it is important to maintain a sense of identity that informs better societal structures,” Okelarin said. “Westernization is not the answer to progress, but we need a blend of who we are and what the world offers, otherwise we will lose what makes us ‘us’.” Creating and sharing these images using modern technology and techniques is a way of showing that “our stories matter”, he adds.

Although he’s had an affinity for art and photography for as long as he can remember – growing up in Nigeria surrounded by the African art his father collected – Okelarin studied chemistry and worked in industry. pharmaceutical as a data architect, in part, he says, to “Nigerian parents who didn’t want (him) to be a starving artist.” But a change in mindset over time prompted him to focus full time on photography by 2015.

Raising awareness of socio-political issues that affect his community and society is another of his roles as an artist, says Okelarin. He says his background, culture and experiences as a Yoruba man living in the UK are the cornerstone of his work, which has covered topics such as female genital mutilation, masculinity, mysticism, identity and race.

Her mythological imagery, as well as other projects, such as the 2020 “She is Adorned” series, use the concept of layering, with subjects literally adorned with layers of beads and African jewelry. Okelarin also uses digital rendering, layering the photographs with aspects of his cultural heritage, such as fabric and textures. This mixture of different processes – conventional photography with AI – has “opened up strong imaginative possibilities”.

“She is kissed by the sun.” Credit: Time

Some of these new possibilities include painting and sculptural work, he says. In 2022 he created a globe artwork for the World Re-imagined project, a project teaching British art history around the transatlantic slave trade in which over 100 globes were placed across the UK.

His work has been exhibited in the UK, Nigeria and the US, and he recently launched his first series of NFTs with Bridge Gallery, an NFT fine art photography gallery.

With work that dives into the past and is constantly evolving, Okelarin says he continues to open up to travel to allow for experimentation and growth.

“As I got older, I discovered that the culture I came from had a beauty and a resonance,” he said. “Living in the diaspora, now more than ever, my cultural heritage is a big part of my identity and who I am. It’s a strength.”