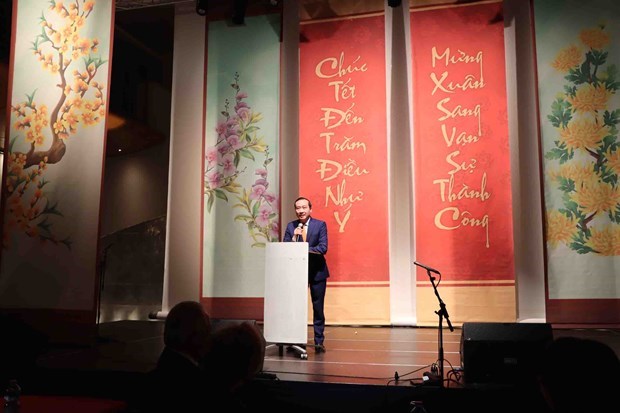 Vietnam’s Ambassador to Belgium, Nguyen Van Thao, speaks at the Lunar new year (Tet) celebration organized by the Embassy of Vietnam and the Vietnamese Association in Belgium. (Photo: VNA)

Brussels (VNA)– BelgiumThe French-speaking television channel BX1 broadcast a report entitled “The Vietnamese celebrate Têt in Woluwe Saint-Pierre” on the Lunar New Year (Têt) which the Vietnamese Association in Belgium and the Vietnamese Embassy in Belgium organized on 22 January in Brussels.

The report indicates that about 400 Vietnamese attended the traditional Tet festival in the Woluwe Saint-Pierre district where not only Vietnamese but also Belgians said to each other “Chuc mung Nam moi” (Happy New Year).

Visitors to the festival had a chance to taste traditional Vietnamese foods and fruits, especially grapefruit – an indispensable fruit during Tet celebrations.

The channel’s reporter introduced “banh mi” (Vietnamese bread) – a specialty whose name is included in the Oxford dictionary.

The festival was decorated with parallel phrases or calligraphy brought from Vietnam.

According to the report, hanging calligraphy is an indispensable decoration in Vietnamese people’s homes during Tet. To write calligraphy, you have to learn for many years, and calligraphers are like martial arts when they write.

Also, the Tet Festival included a performance by an art troupe from Ho Chi Minh City. The report points out that around 5,000 Vietnamese live in Brussels and that the Tet holiday will take place for 15 days from January 22 which marks the first day of the lunar year of the cat./.