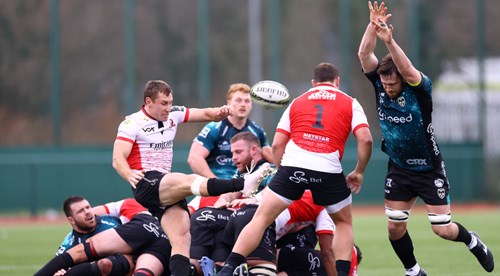 Galway Sportsground has quickly become a graveyard for South African teams in the Vodacom United Rugby Championship, with no team able to win there since entering the competition, but the Emirates Lions hope to be the team to change that. . the Saturday.

The Lions have been a strange team to watch this season, they have done incredible things away from home and also succumbed to defeat in the most tame of circumstances. And much like their character thus far, their victory over the Dragons in the EPCR Challenge Cup last weekend was fraught with the same inconsistencies – taking a 30-5 lead in the first half and then hanging on to win 30-25 in the end. .

But the Sportsground presents a very different challenge for the Lions. Difficult weather conditions in the coastal hamlet of Galway have tripped up top South African teams and poor performance on the artificial pitch has at times been a burden on the South Africans.

Lions defense coach Jaque Fourie believes they can change that this weekend, although he acknowledges it will be difficult, not least because the Lions are in the final week of a tour of four weeks.

“I think the Springboks played here, and I was part of this team that played here in Connacht. We played an 18-a-side draw. We know the conditions are different here, looking outside it’s gray and it rains all the time. Hopefully we can make history and become the first team to beat Connacht here,” said Fourie.

“But it won’t be easy, it will take a 23 man effort which we have to put in place. We have gone through their stuff and we know they are a tough team. If you stay in Galway and see at what it looks like here, you have to be tough.

“We want to go out on Saturday shooting and put two halves together and hopefully beat them.”

The two-half game analogy has been the one that has plagued the Lions all season, especially against the Dragons, where they were their worst enemies in the second half.

“I think it’s been our problem all season that we go out in the first half and play well and then slack off in the second half. We need to go out and put two halves together and hopefully this week we do that.

As the Lions have dropped to 11th on the table, they aren’t too concerned about where the log stands, especially as a number of their remaining home games going forward will be at their home base. Johannesburg.

“At this stage we are not too worried about where we are on the table. We still have seven games left in the URC and they are tough games. We have Leinster, we have Benetton, the Sharks and the Bulls,” did he declare.

“We take things game by game and focus on Connacht. For us it’s a very important game because I think if we can pull off this one this weekend it will get our URC campaign back on track.

“Then we will take it from there. We’ll reassess when we get home, hit the reset button, and resume the next few matches.

For now, they have to navigate the rain and wind of Galway and find a way to “get back to our positives”, as Fourie puts it.

If they can, maybe they can do something special. And prove that the Sportsground is not a hoodoo ground for South African teams.