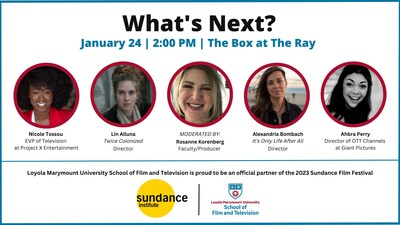 LMU Film and Television School presents “What’s Next?” at the Sundance Film Festival

ANGELS, January 23, 2023 /PRNewswire/ — Loyola Marymount University School of Film and Television will bring together entertainment industry veterans for Sundance Film Festival’s captivating panel “What’s Next?” – a glimpse of the future of the industry.

After the credits and house lights, how do you get a distributor to notice your film and give it financial support? What is your dissemination strategy? What would be more beneficial for your project – a cinema or streaming platform? How do you make sure your movie doesn’t get lost in a deluge of content?

Panelists will answer these and other questions during the free event on Tuesday, January 24at The Box at The Ray at Park City, UT. The event is part of the LMU SFTV Industry Relations initiative to encourage students to network with today’s most influential filmmakers and executives at the nation’s largest independent film festival. LMU will send 10 students to the event this week.

LMU SFTV is an official partner of the Sundance Film Festival 2023.

Rosanne Korenberg, a film producer and LMU SFTV Clinical Assistant Professor of Film and Television, will moderate. As an independent producer, she has a reputation for discovering new talent. His film projects, including ‘Hard Candy,’ ‘Half Nelson,’ and ‘Outlaws and Angels,’ have premiered at Sundance and other major festivals and earned or won Oscar, Spirit, and Gotham nominations. Awards and the Humanitas Prize. among others. She most recently served as a senior vice president at Miramax, where she oversaw “Mr. Holmes,” “by Bridget Jones Baby”, “Southside with You”, “Whitney” and the award-winning film “I, Tonya”. She also oversaw a successful list of film acquisitions and co-productions at Twentieth Century Fox/Fox Searchlight. Korenberg created the new media/Film Division for Caviar Content, where she developed the “Replay for Gatorade” series, which won eight golden lions and ran for several seasons on Fox. She also founded Traction Media, a sales and production company.

The “What’s Next?” the panelists are:

Lin Alluna, who expresses himself through character-driven international documentaries. She graduated in 2017 as a documentary filmmaker from the National School of Cinema in Denmark and was selected as one of the new Nordic talents the same year. Her artistic focus revolves around intimacy and dissolving the boundaries of reality. In 2020, she was selected for the Circle Women Doc Accelerator program. His debut film “Twice Colonized” received the top IEFTA (International Film Talent Association) award for ongoing documentaries in Cannes Docs, the documentary industry sidebar of the Cannes Film Market, and will have its world premiere. at the 2023 Sundance Film Festival.

Alexandria Bombach, an award-winning director, cinematographer and editor of Santa Fe, New Mexico. Her most recent film, “It’s Only Life After All,” which premiered at the 2023 Sundance Film Festival, is an intimate conversation with iconic folk-rock band Indigo Girls. His feature-length documentary “Frame by Frame” (2015) premiered at SXSW and won over 25 film festival awards. Her documentary feature ‘On Her Shoulders’, about the Yazidi activist and Nobel laureate Nadia Mouradpremiered at the 2018 Sundance Film Festival – where Bombach won the US Documentary Directing Award – and was nominated for two Independent Spirit Awards and shortlisted for an Academy Award.

Nicole Tossou, Executive Vice President of Television at Project X Entertainment. Tossou brings 10 years of industry experience and a passion for amplifying voices and stories that often go unheard. After participating in the NBC page program in New Yorkworking on iconic programs such as “The Tonight Show with jimmy fallon,” “Today” and “Saturday Night Live”, Tossou worked at A+E Networks & A+E Studios for five years before moving west in 2016. Prior to PXE, Tossou worked at SpringHill Entertainment where she was deeply involved in the development of both scripted and unscripted content, which included directing Netflix’s “Self Made: Inspired by the Life of Madame CJ Walker”, featuring Octavia Spencerand the History Channel MLK Jr. special “Rise Up: The Movement That Changed America”.

What: LMU Film and Television School presents “What’s Next?” – a glimpse into the future of the industry – at the Sundance Film Festival.”

More information: The panel is free and open to the public. Details are available here.