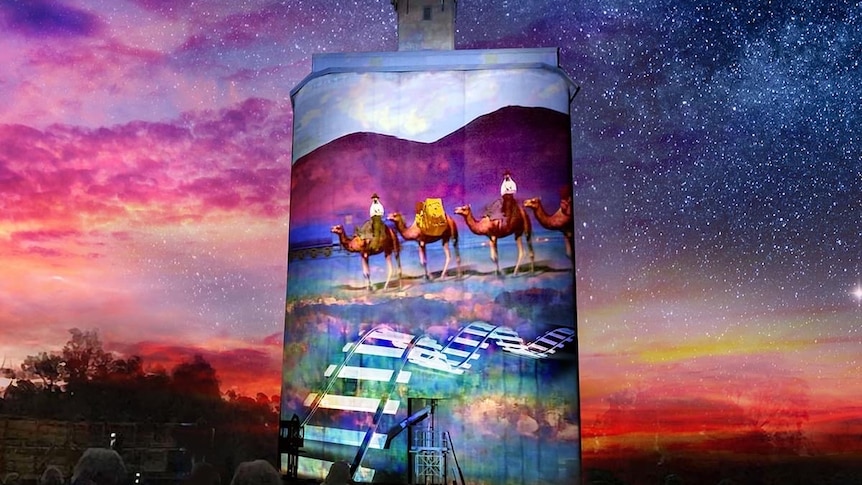 A single silo in the small town of Quorn in South Australia’s Flinders Ranges remains intact during the day.

But in the dark it comes to life, with a three-hour light projection show every night of the year.

The exhibit was nominated as an Australian Street Art Awards finalist for Best Mega Mural.

“The Quorn Silo is right in the center of town, within the historic Pichi Richi Railroad compound,” Ms Drennan said.

“So this neighborhood is trying to stay original from what it was 150 years ago and anything that’s been added has to stay true to how it was first built.

“Fortunately, the light projection does not change the structure or appearance of the space in any way.”

The Quorn Silo Light Show is the first project of its kind in South Africa to take place every night.

“It brought this beautiful light show to the heart of Quorn, then previously a town that was very sleepy… suddenly we now have beautiful, heart-pounding light,” Ms Drennan said.

The show includes an hour-long “tourist” exhibit, featuring stories based on the city’s history.

Another two hours of art follow, showing a “community show” of local artists.

Up to 100 people come on a busy summer night, watching on lounge chairs or tuning in from their cars.

“It’s not just a free attraction, people really learn a lot about the Flinders Ranges and the really unique features of the area from this light show, so they love it,” Ms Drennan said.

“For Quorn, it’s changed the way people see the city, it’s increased visitation, so it’s really important that we keep improving it and adding to those stories.”

“This year, Pichi Richi Railway celebrates 50 years since its original founding, so we are working with Pichi Richi to create a story about how it came together through volunteers,” Ms Drennan said.

“We describe it [the light show] as a rail system, every time we create a new story, it’s like adding another wagon.”