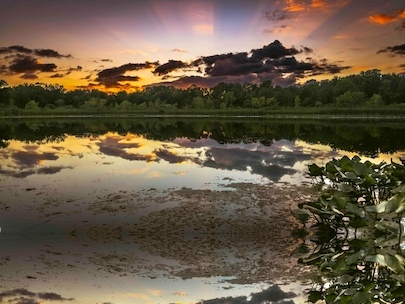 Reflections in Photography comes out at 19 Drips

This post was written by a member of the community. The opinions expressed here are those of the author.

For 50 years, Jim Ludwig (b. 1956) has produced compelling, provocative, and highly influential photographs that show the wonder and fragility of the American landscape, its inherent beauty, and the inadequacy of our response to it. Reflections in Photography: The Photographs of Jim Ludwig celebrates the art of this founding American photographer and explores the reverential way he looks at the world around him and the almost palpable silence of his work. Organized in collaboration with the artist, the exhibition Reflections in Photography: The Photographs of Jim Ludwig is presented from February 3 to April 28, 2023 at 19 Drips Gallery.

Capturing the sense of peace and harmony created by what Ludwig calls “the silence of light” seen in the West Ann Arbor neighborhood, Reflections in Photography features a dozen photos from 2021-2023.

“The photographs in this exhibition encourage us to feel the sense of silence that the beauty of nature can inspire while asking us to question our own silent complicity in its desecration,” said Saeed Ebrahim, director of 19 Drips. Gallery.

In 1973 Jim had his first photo exhibition at the Holly District Library when disaster struck and the building burned down along with his photograph. February 3 also marks the 50th anniversary of Jim Ludwig’s accident at Schuss Mountain. Jim continues to inspire and create at 19 Drips with his Reflections in Photography: The Photographs of Jim Ludwig, Opening at noon February 3, 2023 at 19 Drips Gallery 2891 Jackson Rd, Ann Arbor, Michigan 48103

The opinions expressed in this article are those of the author. Want to publish on Patch?