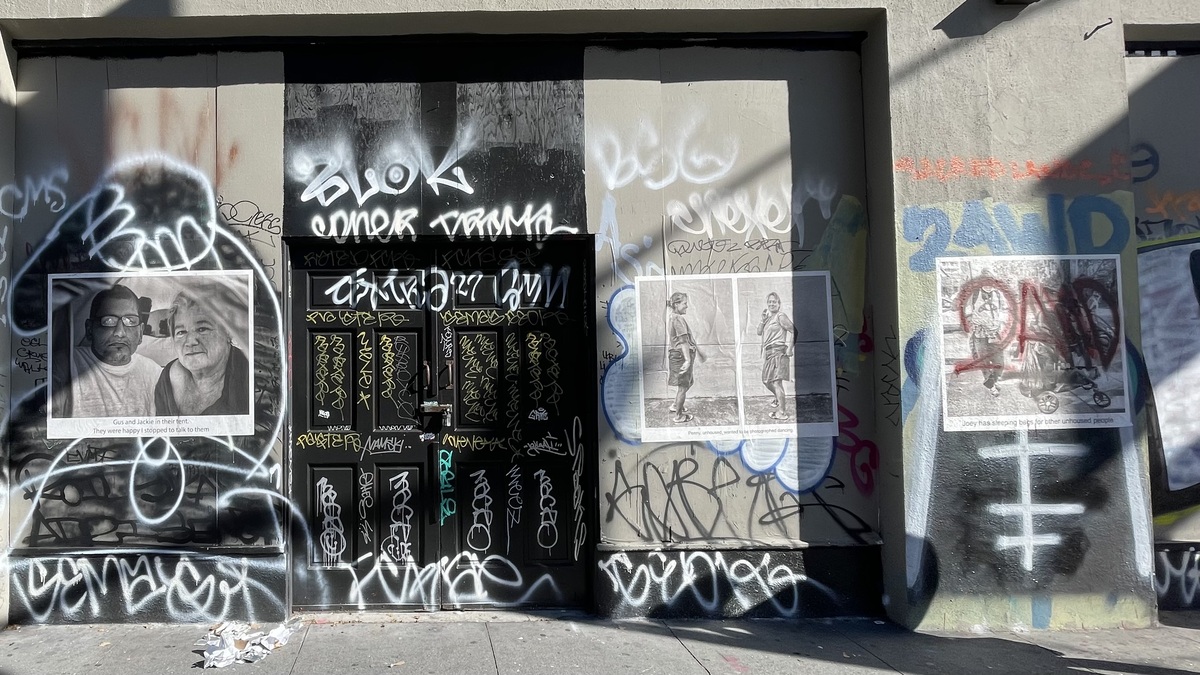 The building on the northeast corner of 17th and Valencia streets displayed vintage sofas and chairs through its large wraparound windows. Today, the furniture seller that once occupied the ground floor has moved upstairs, and the closed windows function as a new kind of exhibition hall: displaying photographs of homeless residents from across the city, taken by Joseph Johnston, a photographer, collector of Mayan art. , and longtime resident of the Mission.

Three of the four black and white images are on Valencia: a close-up of Gus and Jackie in their tent, Penny dancing and Joey with a stroller full of sleeping bags making a peace sign. Around the corner on the 17th, a photo shows four friends squatting with a dog.

Although smaller, the photographs recall the work of JR, a French photographer (photographer + graffiti artist), who displays photographs of ordinary people in public spaces and calls the streets “the greatest gallery in the world”.

Johnson also found in the street the most accessible raw material for an artistic practice that began late in his life. “I was too old to go to Africa or Asia to do a project,” he said, describing what it was like to complete a 12-week photography course at City College at the age of 65 years. “But I’m walking a block from my house and there’s a homeless encampment there.

Joseph had previously shared his work through photo essays, but only began exhibiting them in the city in late 2021, after being encouraged by close friend and geometric sculptor Bob Burnside. The sculptor also provided logistical assistance, finding a place to print the photographs. It costs $10 for a poster “36 inches regardless of the length of a photo,” Johnson said.

The two then post on Sunday morning. They first posted photographs at a closed Bank of America in Castro in October, paused in December and in the rain, and resumed last Sunday, posting the four images at the corner of 17th and Valencia streets.

He has now been photographing homeless people for five years, has been a photographer for 12 years, has lived at the Mission for 46 years, and has lived in San Francisco for 53 years. He aims to photograph at least one homeless person every day and takes pictures of people everywhere. the city, but its ties are strongest with the Mission’s homeless community.

Before photographing anyone, he talks to them “a good time”. “I will not photograph sleeping homeless people,” he says, although he admits he has done so before. The purpose of Joseph’s work is “to make people realize that they are human beings too, just as interesting and valuable as the rest of us, though far more unlucky than most of us” . When he sees people on the street, he usually stops to talk.

The interactions changed the way he views homeless residents. Previously, he avoided residents like Carlos “Charlie” Morales, who walked around the Mission with a shopping cart, filled with a “rug and all” and a folding chair. Joseph saw him every day, but never spoke to him. “When I finally spoke to him, I was ashamed,” Johnson said. He still sees Charlie, who now lives in a tent across from the Atlas Cafe.

Although Joseph claims that his practice of photography has led to a “significant change in [his] attitude,” he gives credit to homeless people and the city: “San Francisco feels friendlier than it used to.

When I visited the images at 17th and Valencia the night after they were posted, Joey’s photo had been tagged – the black and white image now red all over. Below the photo of Gus and Jackie, a man sitting with his back against the wall is making a pipe out of aluminum foil. When I come back the next morning, all that’s left is a pile of aluminum foil scraps.