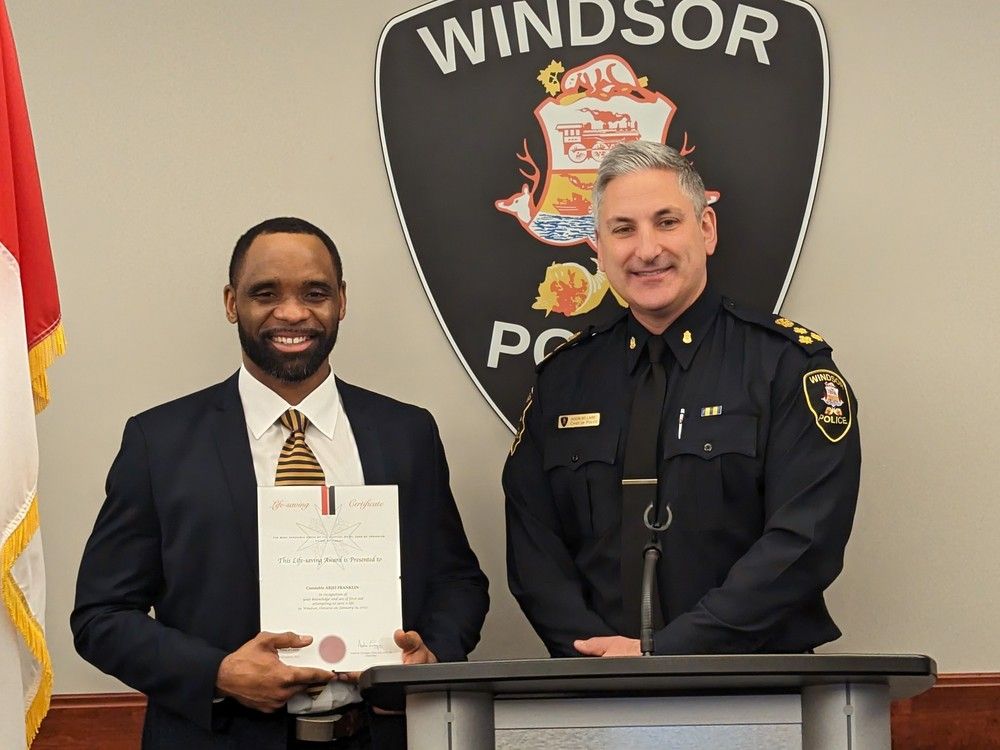 Constables Melissa Jacob and Arjei Franklin each received lifesaving awards from St. John Ambulance at the Windsor Police Service Board meeting on Tuesday.

Sign up to receive daily news from The Windsor Star, a division of Postmedia Network Inc.

Thank you for your registration!

A welcome email is on its way. If you don’t see it, please check your spam folder.

The next issue of Windsor Star Headline News will soon be in your inbox.

We encountered a problem during your registration. Try Again

“I’m just grateful to be able to help the Windsor-Essex community,” said Jacob, who found and rescued a person attempting suicide. “I love being able to make a difference and impact someone else’s life and I guess that just proves you can do it. I try to do that every day at my job.

Jacob responded to a report of a suicidal person in a house but found no one inside. While investigating, she noticed that the door to an attached garage was slightly ajar. It was there that she found someone in medical distress and rushed to their rescue with the help of another officer.

“We were able to provide this person with the right services at the right time,” she said. “I knew, based on my training, how to react, react quickly.”

Franklin, who received another life-saving award in the past two years, was called to a home where a child was not breathing. Once he arrived, he found two people kneeling at the back door of the house performing CPR on the child. He immediately took over the CPR.

With the residence tucked away in a housing complex that might have been difficult for other emergency personnel to locate, Franklin decided to move the child to the street to continue rescue measures.

By then Windsor Fire and Rescue personnel had arrived on the scene and were able to resume CPR.

“Whenever a police officer puts on the uniform and gets in his car, he’s ready to face the situation, no matter what,” Franklin said. “My colleagues do brave things every day and I see it regularly. It was an opportunity for me to react according to my training.

Andrew Gough, a representative from St. John Ambulance, appeared virtually to present the awards and thanked Jacob and Franklin for their service.

“Having been a police officer myself for almost 24 years and having had the opportunity to occupy this position, I can say apart from a very good hot drink at the start of your shift, there is nothing more gratifying than saving someone’s life.

The St. John Ambulance Lifesaving Awards program was established over 30 years ago to recognize those who administered the first air by saving or attempting to save a life. The silver level award given to both Jacob and Franklin recognizes those who did so when their own lives were not in danger.