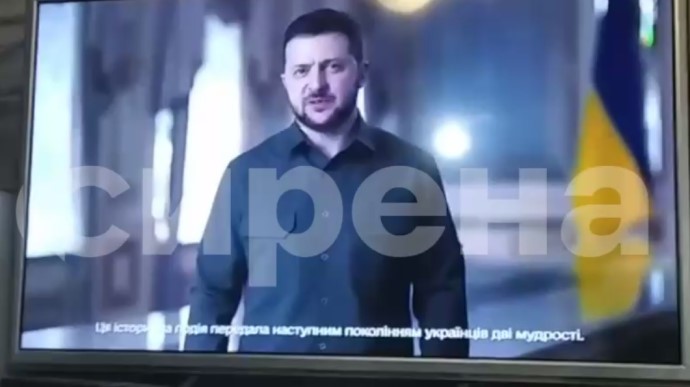 Zelenskyy’s speech aired on TV in Russia and Crimea

A video address by President Volodymyr Zelenskyy was broadcast on television in Belgorod Oblast, Russia, and in Russian-occupied Crimea.

Details: A video of Zelenskyy’s address was sent in by Sirena readers, who added that the signal was choppy, switching on and off all the time.

Eyewitnesses also report that the address was broadcast on at least 10 different television stations.

This is also reported by local telegram channels, such as Bletgorod.

Updated: Later this was confirmed by the local government of Belgorod Oblast. They reported that it was “an unauthorized replacement of a television signal”.

The so-called leader of Crimea, Sergey Aksyonov, reported that the same thing happened on the Crimean peninsula.

As Ukrainska Pravda found out, Russians and Crimeans saw a video in which Zelenskyy congratulated Ukrainians on Unity Day. It aired in Ukraine on January 22.

In his speech, Zelenskyy explained, among other things, how Ukrainians are fighting for their land and why this is necessary.

Journalists are fighting on their own front line. Support Ukrainska Pravda or becoming our patron!